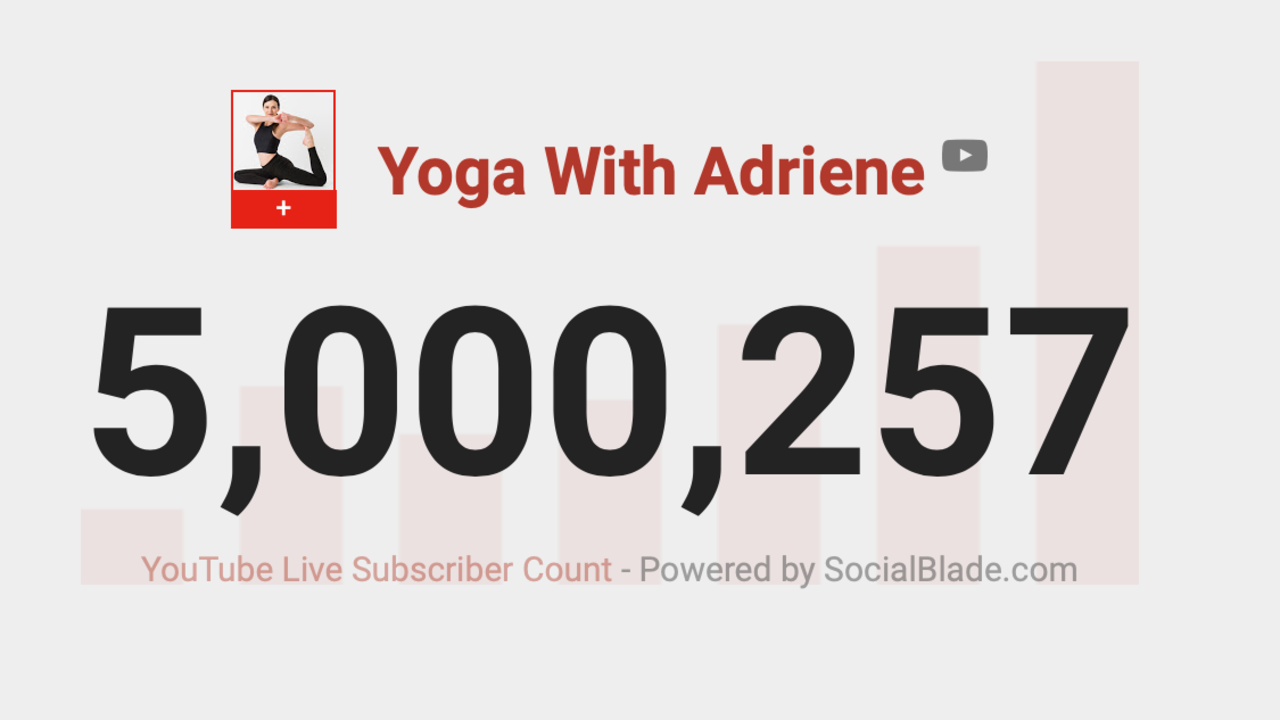 I woke up this morning to see that the Yoga With Adriene YouTube channel had rolled past 5 million subscribers. We knew this was coming but all our projections showed it would still be another week or two - so it was exciting to see we had achieved this milestone earlier than planned.

When Adriene and I started on this journey, we never imagined getting to this many subscribers. Adriene and I talk a lot about “thinking big” and “manifesting” things. (It works.) But 5,000,000 is such a big number that it wasn’t even on our radar. It took us almost two years to get to 150,000.

Since this feels like such a milestone, I thought I’d share 5 things I learned while on this journey.

1. Have a Mission You Believe In and Stay Focused

When we started out, our goal was just to make enough money to quit our day job and make YouTube videos part-time while we focused on art and making movies.

Once we achieved that goal and didn’t have to worry about paying the bills, we were able to focus on the real mission of the channel: providing high-quality free yoga videos to as many people as possible.

Now, that mission helps us answer every question and solve every problem that we run into as a business. We don’t do anything that doesn’t contribute to that goal. We’ve turned down hundreds of thousands of dollars in paid sponsorships because they aren’t in alignment with the mission. When people question our ongoing partnership with Adidas, we can quickly respond with the ways it is in alignment with our mission. And we feel great about it.

This may sound a little woo-woo and not very practical, but it’s been one of the most important tools to our success - and a key component to keeping us both sane while we deal with the growth.   If it was just about the money or the audience numbers, I think we probably would have quit by now.

I tell people this all the time, but they rarely ever take it seriously. Our email list is the second most important element of our business (after YouTube). It’s far more important than our social media channels when it comes to building our community, promoting our videos and selling our products.

Yes, e-mail is old, it’s boring and it requires writing - but it WORKS.

It's also an element of your business that you own. The YouTube Brain could turn on you at any day. Facebook/Instagram could de-platform you. But as long as you have an email list with your customer data, you can still reach your audience and let them know what’s up and what’s next.

If you haven’t started this yet, don’t overthink it. Just sign up for a free Mailchimp account, build an opt-in landing page and start promoting it through your YouTube channel. Write emails anytime you release a new video and give that video some context. Write them like you’re writing to a friend. They don’t have to be perfect, just make them good.

Our revenue from AdSense still feels like fake money to me. It’s great but we don’t factor it into any of our business plans because I feel like it has the potential to go away at any moment.

This may sound like I’m being paranoid but we’ve all heard the stories of popular channels getting demonetized, getting knocked out of search results or being totally kicked off the platform. If you’re going to build an actual business, you can’t really count on AdSense revenue.

About two years after starting the channel, we had hit a wall.

We were putting a lot of time and energy into the channel but we were making hardly any money. We had to do something and my only idea was to launch an online course. We created REBOOT and launched it in December 2013. Over the course of a week, we made more money than we had earned through Adsense in our first two years.   From there we continued to diversify, creating standalone courses, an SVOD service, and physical merchandise. We also carefully chose sponsors to work with and affiliate programs that were in alignment.

Creating multiple revenue streams is important not only because it brings in reliable revenue. A financially healthy business means you are in a position to say "no" to the things that aren't on-mission and to say yes to things that could be a potential financial risk.

For us, it allowed us to say yes to doing live events even though they initially lost a lot of money. It took us some time to figure these out but they are now important for both revenue and community building.

Which brings us to...

4. Create Community Around Your Channel

We started cultivating community when we launched our first course. Adriene and I were both worried nobody was going to buy the course because we already had so many free videos on YouTube.

So we kept brainstorming more things to add.   At the last minute, we decided to add a private FaceBook group. At the time this was still a relatively new concept. But it gave us another feature to add to the sales page! .

The group turned out to be one of the best things we’d ever done. It was a small group but very active, particularly in the early part of 2014 when we were all going through the REBOOT course together. We had daily check-ins and accountability. At first, it was all about the yoga, but gradually the conversation began to expand to other topics. This was a small tight-knit community and many of the members went on to be friends in real life. It wasn’t about marketing or selling products, it was something real.

We have put a high priority on Community ever since. One of our first hires was a Community Manager - someone who was actually a member of that very first REBOOT group. As the size of the audience has grown, we’ve moved off of Facebook and created the FWFGKula which is a dedicated community with almost 100,000 members.

We don’t look at this community as a marketing tool. We want it to be a safe place for people to connect around yoga and all the topics that surround it. The online community has been critical to the success of our live events because it never feels like we are creating these events for strangers. Instead, we’re throwing a party for our friends.

This is kind of like email marketing in that it is old and boring. But it works.

We started the channel with zero budget for advertising. To this day, we have done almost no advertising - outside of a few boosted FB posts for our events.

We started with an idea and a list of keywords. We decided to make videos on the foundational yoga poses first, but after that keyword research drove many of our decisions.

I was very proactive with Keyword research in the early days. This is how we knew what people were looking for and the language they were using to find it. Adriene and I would meet and discuss the list of keywords and then decide what videos we were going to make next. Sometimes the heavily searched keywords didn’t feel congruent with what we wanted to do on the channel, but we figured out ways to position them to integrate them naturally.   There are usually a few “money” keywords in every niche and I felt we had to go after them even if it sometimes didn’t feel very “yogic.”

Those are now some of our most popular videos and the ones that drive the most traffic and new subscribers.

Once you have a little success, it’s easy to forget how powerful search optimization is and neglected it. I’ve done this myself. When the channel growth starts to plateau, it’s usually because I’ve gotten lazy and neglected this aspect.

I look at it like gardening. Sometimes you have to get in there and tend to the garden: pull the weeds, water the plants, till the soil and maybe add some fertilizer.   Every time I’ve focused my time and energy on Search Optimization it’s been returned exponentially.

I'll close this out with a sincere THANK YOU to everyone who has been a part of the Yoga With Adriene story. We couldn't have done this without our subscribers, our community, our supporters and our amazing team. I feel lucky every day to somehow be a part of this thing.