EMPOWER - Behind The Scenes 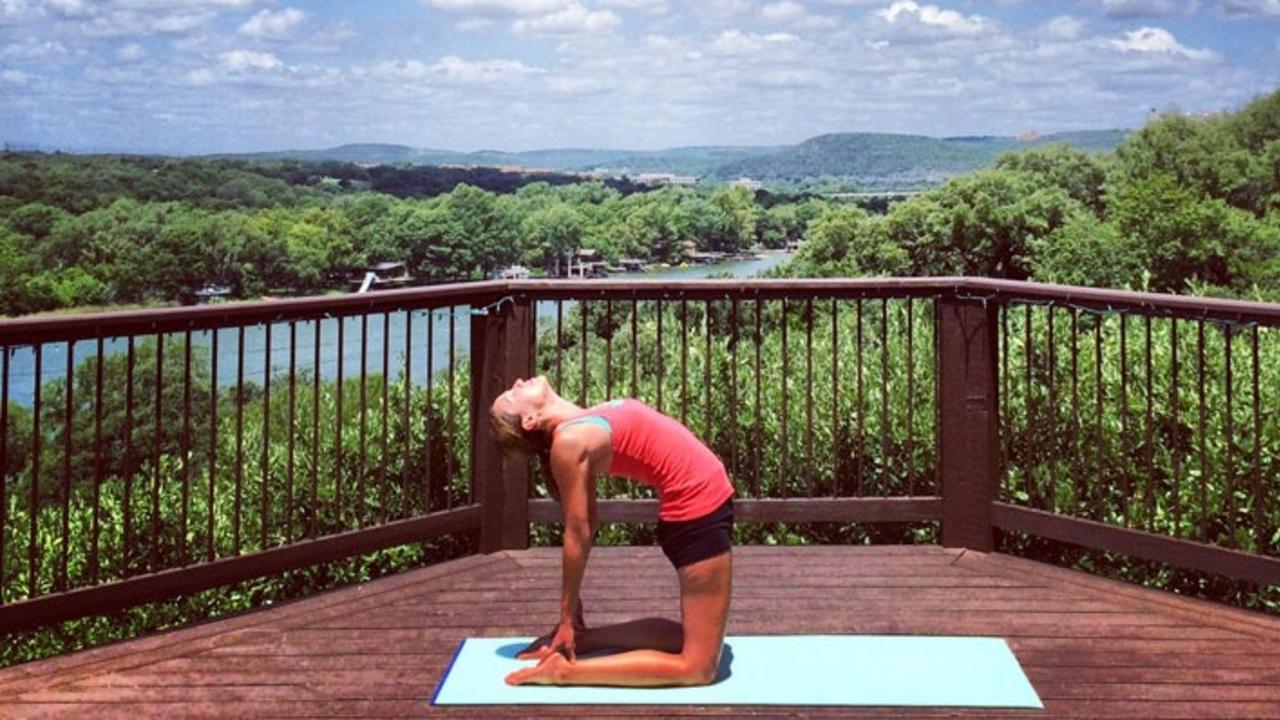 In January of this year we launched the first Yoga With Adriene product. It was called REBOOT and it was a 4 video online class designed to help people get over their "holiday hangovers" and establish a consistent at-home yoga practice. We had no idea what we were doing. It was the first online video product that I had ever launched and everything that could go wrong pretty much did.

Despite the chaos, REBOOT was a huge success. With the help of the REBOOT community, we gradually worked through the technical issues and polished up the class. It was a significant turning point in the Yoga With Adriene project. In addition to the videos and instruction, we created a closed Facebook group for people to share their experiences.

It was in this group that all the elements came together and a thriving community started to take shape. This group allowed Adriene and me to communicate directly with people from all over the world who were fans of the show and liked it enough to invest their own money to take part in a shared experience. Even more importantly, it allowed people with a shared set of interests to come together and communicate with each other. The community (kula) immediately became the most important part of the Yoga With Adriene project. I'll write a dedicated post on this soon.

In the midst of all the incredible things that were going on in the Community, one thing became clear. They were ready for more focused classes and now that we (kind of) knew what we were doing - we were ready to make one.

Adriene and I have had a great collaborative relationship for years. But the great thing about having a dedicated community supporting your work, is that they become a partner in the creative process. Instead of just creating a project that WE wanted to make, we asked the community what they wanted us to make next.

Three things rose to the top of the list.

We decided to tackle the Power Yoga class first. Our most popular videos are the ones focused on weight loss, so we knew there would be interest from our YouTube audience as well.

Using Basecamp, Adriene and I started brainstorming. We made lists of all the things we wanted to include in the class. We also went through a seemingly endless list of potential titles. This process went on for a really long time.

Our original plan was to launch at the end of May. The perfect time to get ready for summer time (and swimsuits). Also, the weather in Austin is great in April in May and I really wanted to shoot this project OUTSIDE... in Nature! This brilliant idea would come back to haunt me. BIG TIME.

Because of the general chaos of real life, months passed and we never solidified a concept, never found a location and never booked any shoot dates. Before we knew it, June had crept up on us. The abstract idea that we had for what we wanted to make was definitely a summer-y type of project and it seemed like a huge missed opportunity to wait any longer. We could tell the Community was hungry for something new. Not just new YouTube videos, but a bigger REBOOT-like program.

That realization kicked us into overdrive. Out of the long list of potential names, EMPOWER began to resonate. Adriene found a location and we scheduled shoot dates for June 23 and 25th. We ambitiously thought we could shoot everything over two full shooting days.

We started to tell people that a new class was coming on July 15th.

I'll admit it seemed a little crazy, but sometimes you just have to go for it. We felt like the universe was on our side. 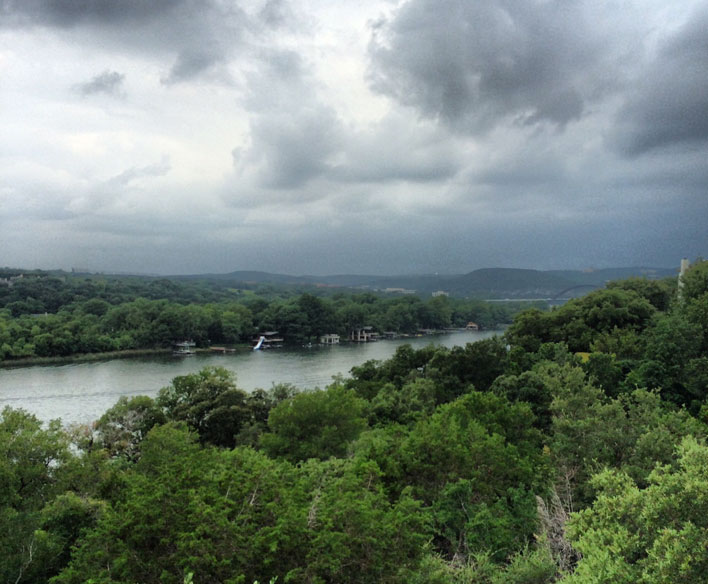 But then we got rained out.

If you don't live in Austin, you probably won't understand how rare rain is in June. We're in the middle of a terrible drought and even in non-drought times it barely rains here in the summer. We didn't even take that into account when thinking about our schedule.

So of course, there was a torrential downpour as soon as we showed up on Day 1. The location was beautiful and it was a pretty great place to watch a storm, but I knew in the back of my mind that we were already behind schedule. We looked at weather radars and it seemed like everything was supposed to be clear by noon. Or 1:00 at the latest.

Finally the rain ended, the sun came out and we set up the gear and rolled out the yoga mats. Now we had an even worse problem. Unbelievably humid heat. It was so hot that we had to take breaks just to cool off the yoga mat. It was getting too hot for Adriene to stay on it for very long. And when she was on it, she was sweating so profusely she kept slipping off.

I was sweating even worse.

It took us all afternoon to shoot a single video. Normally, we are able to shoot them in almost real time. We have a simple two camera set-up and Hilah had even come to help us out. But, it was way too hot for even non-pregnant people.

By 4:00 we were wiped out and we packed it up. At least we were now familiar with the location and we knew we could start earlier the next day. This was all going to work out for the best.

You can probably guess it rained the next day, too. 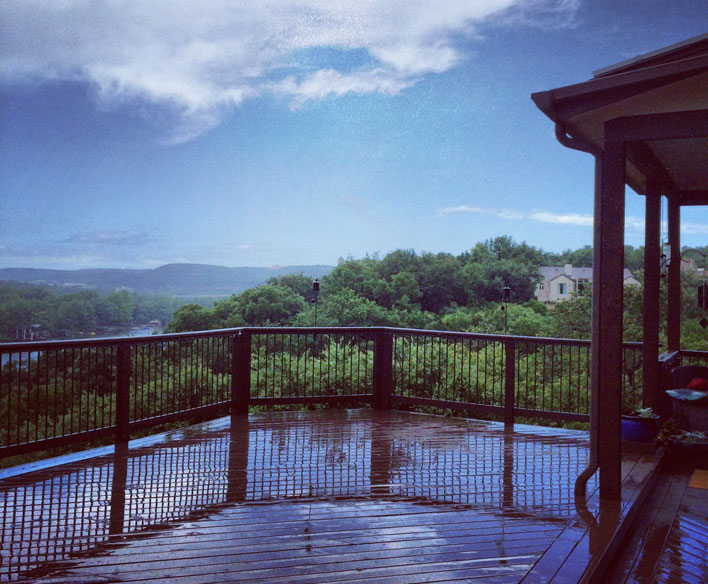 We were able to shoot a single video that afternoon. So by this point we had finished shooting about half of the course. For various scheduling reasons we wouldn't be able to shoot at that location again until July 10th. So we had a few options: push back the launch date, find a different location or just hope for the best.

The location was beautiful and we really wanted the class to have a consistent location. And there's no way we were pushing back the launch date.

July 10th, the weather was finally on our side. We shot the rest of the course. 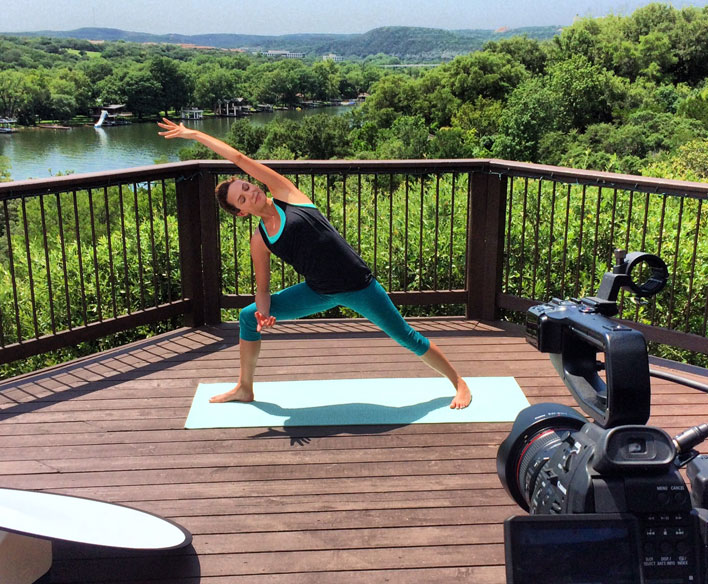 Then, we immediately got to work on post-production and creating the written materials.

The production and launch of EMPOWER has consumed every minute of my life for the last few weeks. I have been completely in "the zone" and really unsure if any of this was going to work until just a day or two ago. Adriene and I have both been working 12+ hour days. I've been sitting right here editing, building pages on the membership site, compressing video, answering support emails. Adriene has been holed up in the basement of an office building recording voice over, checking edits and writing all the written material that goes along with a project like this.

We opened the course for sale on July 11th.

Unbelievably, nothing broke this time. There were only one or two glitches that were easily solved. Most of the messages to the support account were just notes of encouragement. The announcement of the new class seemed to reinvigorate the community. Suddenly, there was something new to talk about and experience as a group. We even had members of the community buying classes for other members who couldn't afford it. The outpouring of positive energy was just unbelievable.

Last night we opened the doors to the first video. Amazingly, people from all over the world have already been working out to videos we shot less than a week ago... and they're posting photos of their sweat drenched faces to prove it.

Here's a map showing the global locations of members of the EMPOWER community.

Everything is still pretty much a blur. I am writing this post while I wait for videos to compress so hopefully it makes at least a little sense. I'll be back with a follow-up post soon that goes into geeky detail about the infrastructure we are using to pull all this stuff off.

Meanwhile, if you have any questions, leave a comment below. I never leave my computer anymore so I will answer it.