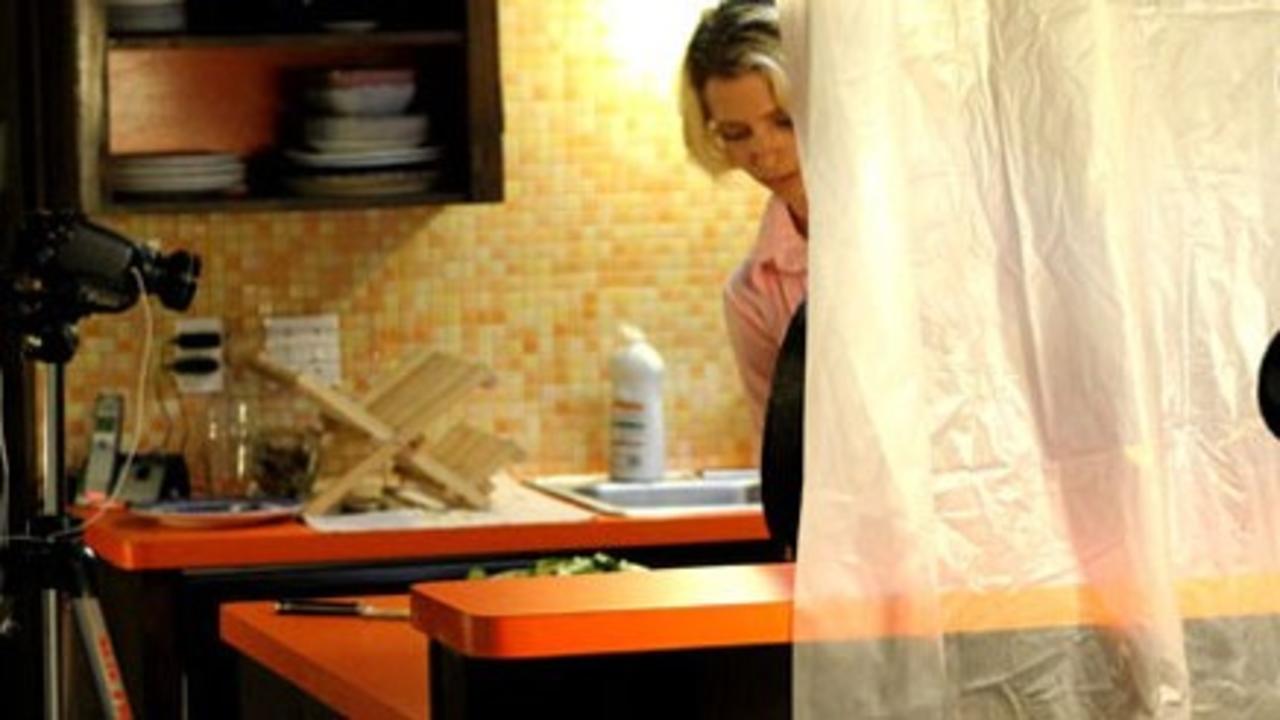 When we conceived the idea for Hilah Cooking, I was unemployed and almost homeless and neither of us had any cash to invest in the show. We decided to scrape together whatever we could and start producing episodes as soon as we could. I refused to let lack of gear be a factor. I have often fallen into the psychological trap of waiting for perfection instead of getting it done. That wasn’t an option in this situation.

Here’s an overview of our production setup. This is the gear we started with and we are still using it today. The only thing we didn’t have at the beginning was the floor lamp. The photo above gives you an idea of what things look like behind-the-scenes. It’s pretty ghetto.

The Camera: I use a Canon HV30

. This is actually a great little camera. You can find a used one for around $500. It shoots 1080p HD and has the option 24P and 30P options. Since I know this is headed for the web, I shoot in 30P. The camera is small and easy to operate. I basically just turn it on, use one of the white balance presets and leave everything else on Auto. The only real downside to the camera is that the menus are a hassle. If you want a lot of manual control you will drive yourself crazy. It also records to tape instead of SD cards, but this isn’t a problem for my workflow.

Wide Angle Adapter: I wouldn’t recommend using a wide angle adapter unless you absolutely have to. Since we are shooting in a tight space, I need it to fit everything into the frame. But it’s easy to get vignetting if you’re not careful and it softens up the edges of the image more than I would like.

Tripod: I use a really cheap photography tripod. I don’t know the exact model but you could probably get a better one for around $30. This tripod drives me crazy because it is rickety and you can’t pan or tilt with it. But, it gets the job done for now. IMPORTANT: You should use some kind of tripod even if it really sucks.

Lights: Our key-light is a three light floor lamp that I bought at Target for around $20. We have a fill light on the other side of the camera, which is a work-light that is clamped to a chair. The fill light is the next thing on my list of things to improve. I’m thinking about building one of these $5 light stands. We also take advantage of the kitchen’s large built-in fluorescent light which is directly above our “set”.

Shower Curtain: That clear plastic is actually a shower curtain that Hilah had in her garage. We thumbtack that up and shoot the light through it to diffuse it a little bit. 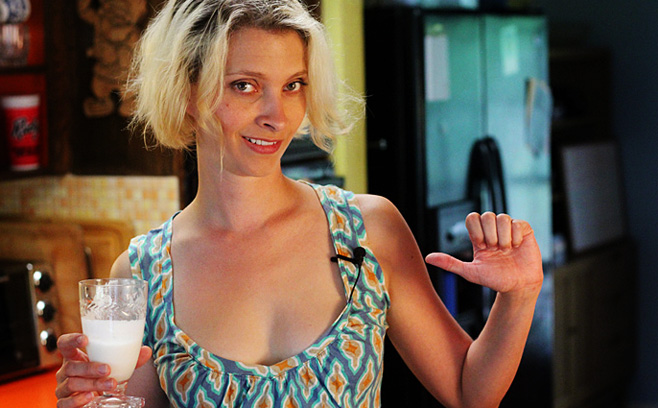 Microphone: For audio, we use an Audio Technica ATR-3350 Lavalier Omnidirectional Condenser Microphone

. This mic sells for around $20 and I’m really pleased with the quality. It’s not wireless so that means Hilah is connected to the camera at all times. Since we primarily shoot in her kitchen, this isn’t a big problem. The fact that it’s wired makes it really quick and easy to use. We just plug it in and go. It’s powerful enough that it can also pick up a second voice when we have guests.

Don’t Get Hung Up On Gear!

When it comes to making a web series, the Gear Does Not Matter. At least not in the beginning. There are popular web shows that are shot with Flip cameras, camera phones and built-in laptop webcams. Use whatever you can get your hands on and start making episodes.
Ask yourself three questions:

Once you’ve got these areas mastered, challenge yourself to start improving other areas and to get a little better with each episode. And remember…

The perfect is the enemy of the good. -Voltaire

This is the first part of a series I’m calling How To Make A Web Show. I’m not claiming to be an expert on the subject of web shows. I’ve only been doing this for a few months. I am figuring this out as I go and I make a lot of mistakes. But, that’s my favorite way to learn. I’m actually hoping to get a lot of feedback and actually implement some of it to make the show better. So, please feel free to make liberal use of the comments section below.