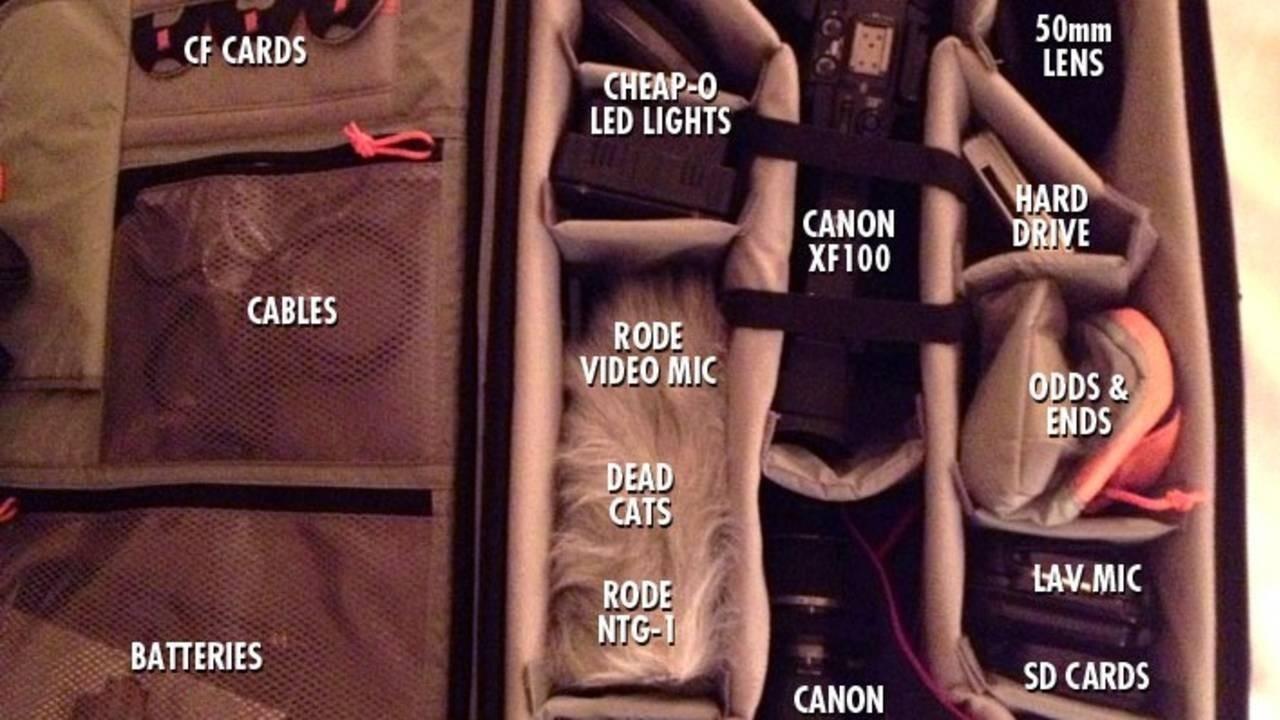 Since starting up Hilah Cooking, we’ve been very careful about keeping our production costs low. I am a firm believer in low-overhead and zero debt, so we try to keep our gear as minimal as possible.

We started out with a camcorder we had laying around and our only real upgrade was gear we won from YouTube. But when we lined up the deal to do Hilah’s Texas Kitchen, I knew it was time to (hopefully wisely) invest in a little more gear. This is still a micro-budget project, but we needed a little more firepower. I would be a one-person crew, and we would be shooting in awkward situations with very tight time frames.

My goal was to put together a run-and-gun travel video kit that would be easy to transport and allow me to shoot really fast whenever the opportunities presented themselves. This is the package I put together and it’s worked really well for me so far.

I wanted something that could hold safely transport all of our gear and was easy to use in the field. This bag has been incredible. I’ve always been devoted to Pelican cases in the past, but I ended up with a bunch of cases holding individual pieces of gear. This case let me jam everything I needed into one bag with wheels. It even has a kickstand so if you’re on location you can set it up at a tilt and easily access whatever you need. Even though I’ve only had it since the beginning of the year, it’s seen some serious miles and been in some rough situations. It’s still in great shape and has done an awesome job of protecting the gear inside.

Buying a small sensor camcorder in this new age of DSLR video seems very old fashioned, but I needed something for run-and-gun shooting. The XF100 has been great. It’s small, has XLR inputs and shoots great images (once you take the time to figure out the picture profiles). I use this primarily for the interviews where we are following people around kitchens or other locations. The real unexpected joy of this camera has been the 4:2:2 50Mbps Codec. In post this footage feels very thick (in a good way). You can do a lot of color correction without the image ever breaking down. My only real complaint with this camera is that it doesn’t have dedicated focus and zoom rings. Instead, they’re combined into one ring and there is a switch to toggle it back and forth.

This is a little round light that you can mount via hot shoe or directly onto a shotgun mic. The design is kind of weird and clunky but it’s really come in handy in a couple of dark locations. It’s not very powerful, but it’s enough to add a little light to your subjects. (TIP: If you’re shooting in a smoky BBQ pit, this is not going to be enough light.)

For almost three years, I very proudly used only a $20 wired lavalier mic. We upgraded to this Sennheiser wireless kit a few months ago. It was the first time we actually bought new gear. This is pretty expensive, so it was a big deal. Thankfully, switching to this wireless kit has been absolutely life changing. I can’t recommend it highly enough. In fact, when we were commissioned to produce a series of kids cooking videos, I bought a second kit so I could mic both people. For most of our travel shoots, we just leave Hilah miked up and start rolling when a good situation presents itself.

I use this to record a second channel when I’m shooting with the XF100. I just turn it on and try to make sure the levels don’t go too hot. For our first batch of shoots we only had one wireless mic so I relied on this to get the vocals for whoever Hilah was talking to. I’ve been happy with it so far but haven’t had time to mix the sound on these videos yet.

This is the same camera we’ve been using for quite awhile. I wasn’t crazy about shooting video on it at first, but I realized on our first trip that I’ve really fallen in love with this camera. I thought I would primarily use the XF100 but if it was a shot that didn’t require tricky focus pulls, I kept coming back to the 60D.

There are some other odds and ends packed into the case – including a MacBook Air – so this really gave me a complete production kit in a rolling case. Not pictured here are a couple of Manfrotto tripods, but other than that all the gear we used to make the travel show is in the photo above and it’s worked out great. The only things I’ll definitely be adding before our next trip are some ND and Polarizing filters.

Now that I’ve geeked out about all of this gear, I’m excited to get back on the road and back to shooting!

NOTE: I want to thank Mark Shea at Overlander.tv for his helpful posts on lightweight travel gear.

I’d love to hear what YOU are using to make your videos. Also, am I missing out on anything obvious pieces of gear that would increase my either production quality or overall quality of life? Let me know in the comments below!