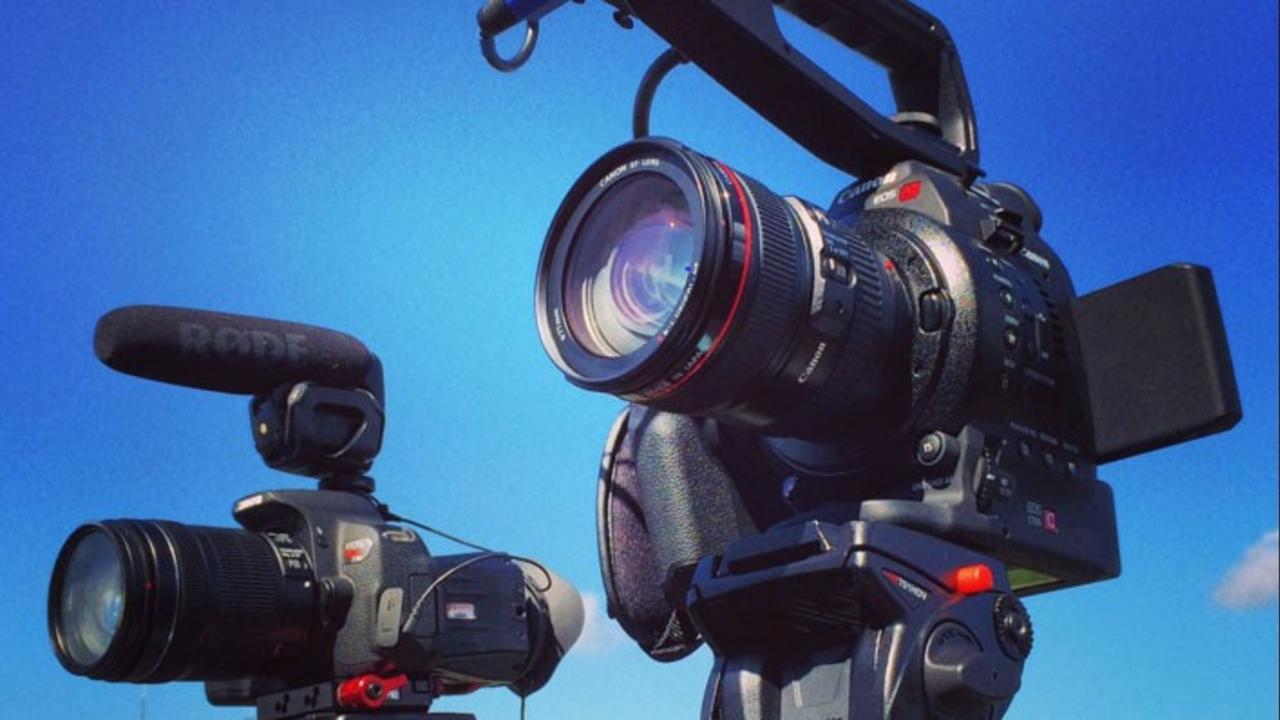 2014 may be another personal record-breaker for me as far as the number of videos I produce. It will definitely be a record breaker when it comes to the number of minutes produced. Even though I am producing more, I have started to downsize the amount of gear I use.

Last year, I went a little bit overboard. I had been using nothing but consumer camcorders for years. As soon as money started coming in from my various projects, I did what any self-respecting video geek would do - I started buying gear! It was fun but I ended up with too much stuff that ended up bogging down things when it came to production. There were too many options and too many things to think about. I am still a micro-budget producer and almost always a one-man crew. Time is always of the essence and I already have too much on my mind. So I started to downsize.

My production set-up is now what you see in the photo above. For outdoor shoots, that is the whole thing (except for a collapsible bounce-card that I use when I have someone on-set helping me). We just produced the 5-hour EMPOWER yoga class with this set-up.

A-CAM: Canon C-100. I absolutely love this camera and if 4K wasn't looking, would have already bought a second one. After spending just a few hours with this camera, I never wanted to shoot with a DSLR again. This is easily my favorite out of all the cameras I've owned so far. The only big downside is the viewfinder which is terribly designed and feels really out of place considering how great the rest of the camera is. The flip-out monitor isn't so great either.

B-CAM: Canon T5i. As much as I love the C-100, I am stuck operating this one most of the time because I use this for tighter shots. If I go very wide on this one the image is way too soft to cut together with the C-100 footage. Close-ups and even medium shots are sharp enough. For an entry-level camera it has performed really well. It's funny how much better the flip-out monitor is compared to the C100. This camera replaced the Canon 60D that I used for years. I think I just wore it out. I took it in for repairs but it had so many issues the repair guy told me it wasn't worth fixing. It still works great for stills but overheats or shuts down immediately if I try to shoot video. RIP.

Sennheiser G3 Wireless Lav System. I've been using this for quite awhile. I actually have two kits now in case I need to do an interview. I've got absolutely nothing bad to say about this kit. I've even dropped the receiver a few times but thanks to the solid construction it still works great.

RODE Videomic Pro. I don't actually use any of the audio from this mic. It serves as a cleaner reference track. This helps FCPX really nail the synchronization of the footage.

Zacuto Z-Finder. I'm not crazy about the Z-Finder but when shooting outside it's the only way I can see what I'm doing.

Manfrotto 701 HDV Head with 755XB Tripod Legs. These are great lightweight tripods. They're a little TOO lightweight for the C100 but the ease of set-up and transport make up for it.

That's all I use when shooting outside. It's easy to transport and quick to set-up and tear down. I use the same configuration when shooting inside but I add three lights.

Fotodiox Pro LED 508 A. This is a cheap Litepanels knock-off but it does the job. I especially like that it comes with a case and batteries. All you need is a light stand.

Linco Softboxes. I hate softboxes because they are normally just too much work to set-up. Linco has a great design that works like an umbrella. The only part that's time consuming is screwing in all the lightbulbs. These lights are great for creating big soft areas of light. They also come with cases which is turning into a big selling point for me.

So that's my current production setup. For the evolution of my Gear check out these posts:

If you have any questions, please leave a comment below. And I'd LOVE to hear what gear you use to produce your videos.  Leave a comment and tell me all about it. The comments section has hereby been declared a safe place for Camera geek discussion.