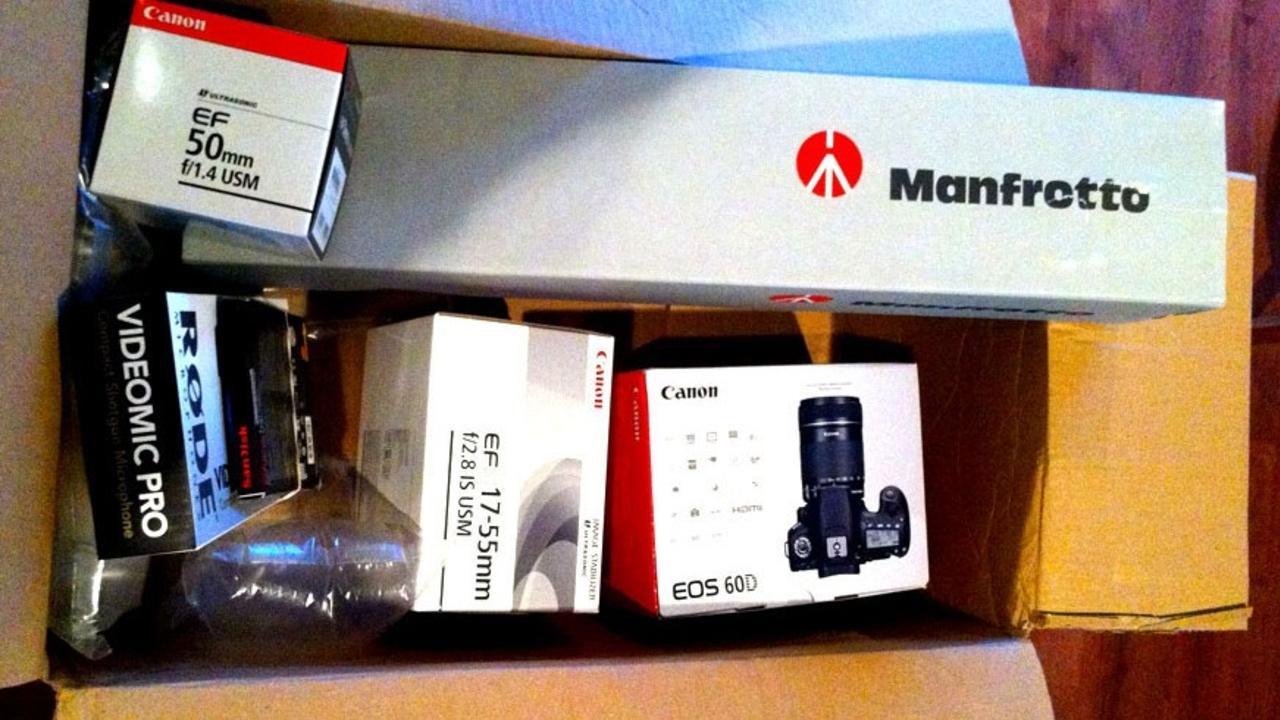 But, I was starting to get a little restless. After hanging out with some shooters for the Food Network (and ogling their gear), I really wanted to make the transition to shooting with DSLRs. When we heard that we would be getting $5,000 of gear from YouTube, I decided to just wait and see. The gear was selected by YouTube and we didn’t know what we would be getting until the boxes from B&H Photo arrived. My fingers were crossed that a DLSR would be in the mix.

Here’s an overview of what was in the first box to give you an idea of what YouTube apparently thinks is a good starter kit.

Some of their choices were kind of interesting.

Canon 60D. Strangely enough, this is exactly the camera I had decided to start saving up for. It took me a little while to get comfortable with the transition from a camcorder to a DSLR, but I love it now and can’t imagine going back. The downside to this camera for a lot of our fellow YouTube NextChefs is that there is no autofocus and many of them shoot their video themselves. This can make things kind of tricky and some of them have gone back to using camcorders and only use the 60D for still photos.

Canon EF 17-55mm f/2.8 IS. I love this lens and it’s quickly become our primary lens for just about everything.

Canon EF 50mm f/1.4. Another outstanding lens. I don’t use it much for video, but all the time for tabletop shots. It’s light years ahead of the thrifty/nifty fifty.

Manfrotto 701 HDV Tripod 701HDV head Nice and stable, incredibly smooth panning and tilting. We’d been using a lightweight tripod designed for still cameras until now, which meant we could never move the camera while filming. This is a nice change.

Rode VideoMic Pro. I’ve only used this a few times. For our particular show, the cheapo wired lavalier still performs better. If I’m running two cameras I will usually put this one the second camera, but rarely use any of the actual audio from it. For shooting cooking videos, I think some kind of lavalier set-up would have been a better choice for this package.

SanDisk Extreme 8GB Card. I’ve heard great things about these cards and have had absolutely zero problems with it. However, 8GB isn’t enough space and I ran out in the middle of a couple of shoots before remembering to buy additional cards.

Logitech HD Pro Webcam. This is still in the box as all our computers have built-in cameras, but I guess this was a necessary inclusion since all the classes were conducted using Google Hangout.

MyStudio Tabletop Photo Studio Seamless Cyc Background. This is basically a huge white piece of plastic for doing tabletop photography. We use it for the close-ups of the finished and plated food. This has really come in handy, but it’s huge and doesn’t collapse down at all – so it’s taken up permanent residence in our living room.

Overall, it’s a pretty awesome kit. With the new gear we’ve been able to speed up our production and get a little closer to the look and feel we’re aiming for with the show. The plan from the very beginning has always been to produce new episodes on a consistent basis while incrementally increasing quality. So this gear has helped out a lot. Eventually, my plan is to add a Canon T3i as a second camera, a wireless lav, and a few more lenses – but for now, we are cranking along pretty well.

I’d love to hear your thoughts about YouTube’s Starter Kit – as well as what kind of gear you’re currently using to produce your projects. Leave a comment below!

Next up: 7 Things We Learned from the YouTube Next Program.